The focus of the first edition of Prosperous Planet’s Insight series is the cocoa industry, a sector mired in social-ecological challenges but also one with new business opportunities for those embracing radical transparency.

Here in Europe, we love our chocolate! We consume on average 5kg per year, and with growing global demand from other regions as well, the cocoa industry is expected to double between 2017 and 2025.1 This is, however, a sweet that comes with a bitter aftertaste. A recent report funded by the U.S. Department of Labor has found that child slavery on West African cocoa farms, where 70% of the world’s cocoa is grown,2 has increased in the past 10 years from 30% to 40%—now involving around 2 million children.3 Although the chocolate industry is a $130 billion industry, many cocoa farmers make less than $1 a day and have never tasted chocolate in their lives.4 It is such vast economic disparities that create fertile ground for child slavery and other deeply unsustainable practices to take hold within the industry.

Large chocolate companies generally rely on a global commodity supply.5 This means that they have no simple way of knowing the origin of their cocoa at any given time, whether children have been enslaved to produce it, nor what precise measures have been taken to ensure that the production is environmentally sound. In an increasingly connected world, global sourcing emerged as a specific concept in the 1980s as an efficient way for industry giants to ensure a stable cocoa supply at the lowest possible price.6 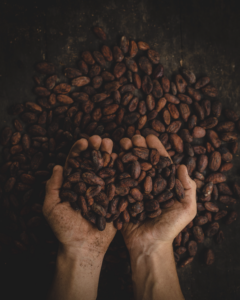 Following the eventual emergence of customer demands for organic and fair production conditions, such concerns were managed through the utilization of third party certifications. As structures for keeping certified and noncertified
cocoa beans separated during processing have often been lacking, the “mass-balance” certification method was created.7 Simply, this means that there is no way of knowing whether a chocolate bar is made with certified cocoa beans or not. Instead, companies and third-party certification organizations promise that somewhere in the world an equivalent amount of certified cocoa beans has been produced at some point. This is a promise that is, of course, impossible to verify. As sustainability is increasingly becoming an imperative on several fronts, businesses need to understand that former methods of approaching sustainability as an effort that can be “out-sourced” to third party actors are now dead.

Moreover, the fundamental lack of transparency in the cocoa industry is beginning to threaten the profitability of industry giants. This harsh reality recently struck Mars, Hershey, Nestlé, and other large chocolate makers as they were named in a child slavery class action lawsuit in February 2021. The International Rights Advocates, a human rights organization, is driving the lawsuit against these companies on behalf of eight Malian men who were forced to harvest cocoa in Côte d’Ivoire after being trafficked as children. According to the Advocates, the companies named in the lawsuit are benefitting from continuing to sell cheap cocoa harvested through child slavery.8 Such high profile cases can negatively affect brand value and customer loyalty, signaling also a necessity for companies operating in the cocoa sector to shift towards a new future free from the trappings of unsustainable social and environmental practices. Indeed, there is a strong business imperative for paying cocoa farmers more as equity forms the core of any viable partnership in a hyper-connected world.

So, what is the future of the cocoa industry, then? It is difficult to think of anything more immoral than child slavery, and since there are companies thriving through this practice without a moral imperative to change, it is essential to point out that there is also a powerful business case for engendering radical transparency in the cocoa value chain and restructuring the entire industry towards a sustainable development trajectory. If cocoa farmers remain economically marginalized, the challenges confronting the industry—such as low levels of adult literacy, health risks, and lack of access to quality education for children—seriously threaten the cocoa sector’s long-term viability and production.9 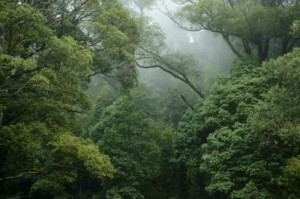 Addressing the social issues rampant in the cocoa industry is not only linked to improved brand value and customer loyalty but also to more complex interlinkages typical for the hyperconnected world we live in today. Cocoa farmers’ limited access to economic development opportunities does not only negatively impact their communities and their children; it also risks exacerbating deforestation and further driving biodiversity loss, the climate crisis, and future pandemics. In Côte d’Ivoire, more than 80% of the country’s forests have been lost and converted to agricultural land in the past 50 years—a phenomenon largely due to the cocoa industry. With low yields from older trees, pests, and diseases that target cocoa plants, cocoa farmers are driven to expand their agriculture into surrounding forests where soils are not yet depleted of nutrients nor eroded. Loss of tropical forest is a major risk factor for global sustainability today, with highly probable feedback effects on the future of the cocoa industry itself. Here, we know both the climate crisis and biodiversity loss will negatively impact productivity.10 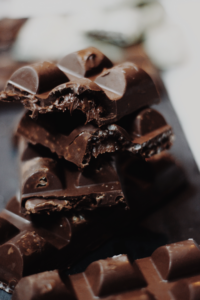 “If we are talking about the food industry, we need to take so many parameters into consideration. Today, we are putting an extreme pressure on Earth’s social and ecological systems. We need to focus on working within the planetary boundaries and making sure all
production includes human rights. For the cocoa industry, creating long-lasting relationships between buyers and producers where producers are making a living wage is key to creating a win-win-win situation for cocoa farmers, businesses, and the environment.”

Currently, the cocoa industry is largely controlled by a small number of multinational corporations whose business models are based on non-transparent, global sourcing of cocoa, and although initiatives, pledges, and certifications exist to improve the livelihoods of cocoa farmers and prevent ecological suffering, research suggests that many initiatives are not reaching their intended goals due to a lack of taking complexity into account (SRC reference—get from Elin). In some cases, sustainability arguments have been used to stronghold farmers into accepting lower pricing (Aljazeera article—get from Elin). Moreover, global sourcing is no longer an acceptable path for an industry that is increasingly held accountable for the production systems they profit from, particularly when calls for radically transparent supply chains are emergent.

Our analysis points to a future of the cocoa industry where transformational sustainability is at the core of business models, engendering financial success through social-ecological sustainability. Companies working within the cocoa sector have huge possibilities of reimagining their business models and supply chains. Ensuring cocoa producers can sell their crops at a price that enables them to earn a living wage and that relationships between producers and buyers are built on an equitable share of risk can avoid the economic and environmental exploitation intrinsic to the current global sourcing model built on deep inequality. Small and medium sized companies with strong consumer brands that use cocoa have much to gain from taking advantage of their agility to deeply transform, end out-sourcing of their sustainability efforts to third-party actors, and create radical transparency in their supply chains.

Elin Enfors-Kautsky, PhD and founder of Prosperous Planet, gives us these parting words:

“As transformational opportunities are clearly opening up in this sector, we see both individual companies getting ahead and finding completely new ways of sourcing their cocoa as well as new ecosystems of partnerships where suppliers add value through transparency, blockchains, etc. To the consumer, this all adds up to a well-respected modern brand that they love. For companies, it is as far away from fluffy sustainability talk as you can go–we are talking about making realistic assumptions on risks previously not considered at all, and that relates directly to the bottom line. As a sustainability scientist, I am excited about the potential that lies in this.”